So, uh, there was a scandal. So sad, we're all terribly devastated here. It's awful, really. Rending of garments, wailing in the streets, dumping out of craft beer pints, ritual flannel sacrifice, etc.

Oh, wait, no it's not. Yeah, so, other than the Oregonian, and Willamette Week newspapers, pretty much nobody I know gives a shit. Everybody I've talked to about this has the following reaction: "Oh, what? Really? Huh. Who's the new guvna?" 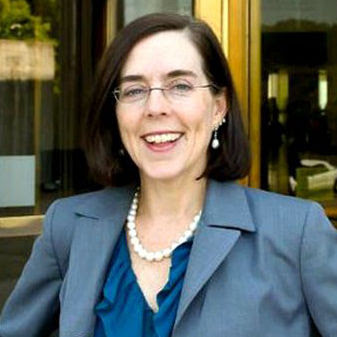 The woman pictured here, that's who, and that's where it gets good. Because of Kitzy's stupidity, we actually get a real, honest-to-FSM liberal female, Kate Brown, as Governor. And get this: She's also bisexual. First openly LGBT guvna in the whole damn USA. Woo! Yay Oregon!

So, if that's the outcome of this scandal, I think we need more scandal around here. Sorry Kitz, you were a good guy, that (mostly) did good work, but you went and fucked up. Hope for your sake you don't go to prison, but that's about it.