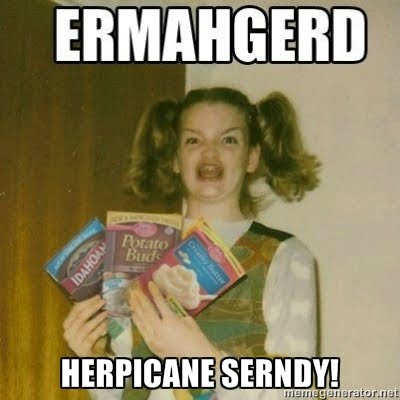 Hopefully like the girl above all my New York lieberal scum internet friends have been hording their mershed pertaters and such so that gawd doesn't cause you to sterve to derth in the violent aftermath of Herpicane Serndy.

No way am I going to comment in yet another one of those threads over at LGM, but for some reason I did click the link to RAF's post over there. In that link you will find that this "person" describes themself as:

Seriously? You self describe as that? I find it hard to believe that this is a real person and not a Fenwickian style persona as online performance art. Or a BYU-educated academic. Oh, wait...

Also, too: When reading his gibberish, I can't stop thinking of this.

Against my better judgment I watched the debate last night. I was pleasantly surprised not to be tempted to toss my pint glass at the TV more than a couple of times.

With regard to the WTF moment and fucking hilarious "binder" thing, this bit immediately after that also caught my attention:

Now, one of the reasons I was able to get so many good women to be part of that team was because of our recruiting effort, but number two, because I recognized that if you’re going to have women in the workforce, that sometimes they need to be more flexible. My chief of staff, for instance, had two kids that were still in school. She said, I can’t be here until 7:00 or 8:00 at night. I need to be able to get home at 5:00 so I can be there for — making dinner for my kids and being with them when they get home from school. So we said, fine, let’s have a flexible schedule so you can have hours that work for you.

What we can do to help young women and women of all ages is to have a strong economy, so strong that employers are looking to find good employees and bringing them into their workforce and adapting to a — a flexible work schedule that gives women the opportunities that — that they would otherwise not be able to — to afford.

That is just condescending as all hell. Everybody wants a flexible work schedule, you fucking asshat! It's not just "mom" who should have to be able to work, take them to soccer, go home and make dinner, tuck the kids into bed, do the dishes, etc. Y'know, if women made as much (or more, FFS!) than men for the same work, maybe dad might like, and be able, to do some of those "home" things while mom stays late for a meeting?

Is it really so fucking hard to imagine a world where everybody had flexible schedules and equal pay for equal work? Just a possibility? Ever thought about that Willard?

No, of course you haven't. You'd prefer we still lived in the pretend 1950s America that only ever existed on TV, you pathetic fucking misogynistic Mormon wanker.

In a just and sane world (i.e., not this one) women would be seeing this bullshit and Willard's general contempt for the moderator and the women asking the questions and run away screaming from his candidacy. Perhaps in this world it'll translate to fewer votes for the wanker. We'll see.

UPDATE: I see I'm not the only one to notice this part.

UPDATE AGAIN: I want to make clear that I, a (married) man with no children would also like a flexible schedule.

Today in super cheerful news from the "Golly gosh we have awesome allies" news desk is this from Harper's Weekly:

A 15-year-old schoolgirl named Malala Yousafzai was flown from Pakistan to the United Kingdom for medical care after being shot in the head by masked Taliban militants in the Swat Valley. Yousafzai, who at the age of 11 began blogging for the BBC’s Urdu service under the pseudonym Gul Makai (“cornflower”), was targeted for championing girls’ education rights. “She has become a symbol of Western culture in the area,” said a Taliban spokesman. “She symbolizes the brave girls of Swat,” said a local filmmaker. Members of the Pakistani Taliban said they would target journalists for giving the attempted assassination “undue” coverage and for unfairly portraying the Taliban as the “worst people on earth.”

You stay classy Pakistan! Good thing you're not one of our enemies or we'd be bombing the shit out of you right now with drones or something.
at 1:49 PM 6 comments:

My contribution to this Paul Ryan stupididty: 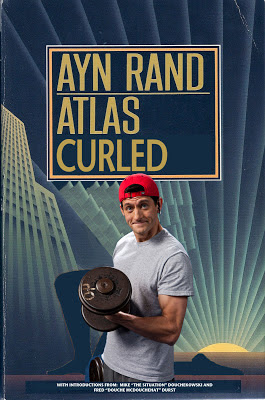