And especially your "peace officers." Get your fucking shit together, you racist fuckwits. You deserve every bit of the backlash you're seeing, and that you don't understand that just underscores the massive problems with race this country still has.

(Disclaimer: I'm very, very white -- I hate that I have to be associated with the small(?) number of you racist shitheads in any way.)

Moving sucks, but then you wake up to this view and you realize why you went through the whole crazy process. 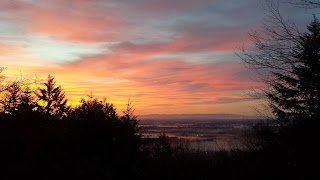 1. Oregon
Standout stat: 6.3 craft breweries per 100,000
It should be noted that our entire editorial staff (except for Kryza, who lives in Portland and likes to tell people about it) was actively rooting against Big O in this ranking. It leads any booze-related national conversation on the strength of its unassailably dense beer scene, but OR's also third in wineries, fifth in distilleries, and 13th in bars per capita. Oh, did we mention craft beer and wine alone account for $4.6 billion in economic impact each year, and Oregonians drink 2.65 gallons of booze? Because it does, and they do. Basically, it's a big, boozy bully, and we wanted to take it down a peg or several. But the numbers don't lie -- The Beaver State is America's Booziest.

Suck it, you buncha sober losers. :-b

In a related study, extensive research has found that buying a new house and moving for the first time in eleventy-zillion years results in a dramatic increase in quantity of alcohol consumed. The study is ongoing, with an additional focus on examining any correlation between types of remodeling projects and choices of beverage.

Email ThisBlogThis!Share to TwitterShare to FacebookShare to Pinterest
Labels: beer, my life is better than yours, Oregon

I'm moving. There will be even fewer shitty posts than normal around here for a while. I know you're all terribly upset.

I guess I'll be nice awful and make sure you all know about the Cards Against Humanity's Holiday Bullshit for this year (hurry, less than 200,000 left, they'll go quick).

To tide you over until I post again, here is a mesmerizing picture of the McKenzie river I took a couple months ago:

That is all, we now return you to your regularly scheduled blogoscape. See you on the flipside, if I survive.

Email ThisBlogThis!Share to TwitterShare to FacebookShare to Pinterest
Labels: and now for something completely different, filler, fools, Morose Monday, my life is better than yours, nature of time, squirrels, whining, zero fucks

While the rest of you losers out there in the great wasteland known as 'Murka lick your wounds, here in Beervana, we remained (relatively) sane and easily re-elected our surprisingly-not-completely-useless Democrats, and legalized pot. Overwhelmingly, also, too: 703,275 to 579,188. Took us a few tries over the last couple cycles, but hey, I'll take it.

So, come July (yeah, unfortunately it'll be a while before the law takes effect), I think I'll brew up an inaugural batch of Mary Jane Ale wherein I legally toss in a gram or two of legal pot along with the hops. I'd replace all the hops with pot, but hops are only $4 an ounce, and beer needs multiple ounces... You do the math.

I've been avoiding the news other than this, since when I glanced at it briefly all I saw was "OMG NEW REPUBLICAN MAN-DATE LET'S HEAR FROM CHRIS CHRISTIE ABOUT HOW AWESOME THIS ALL IS AND WHAT DOES THIS MEAN FOR 2016!!!!?!?!!!?!?!?" -- is there any other good news to glean from the otherwise shitty midterms out there in your necks of the woods?

There is dissension in the blogroll! 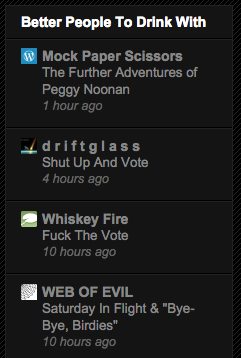 I'm with Drifty -- vote, then bitch later -- but I understand the "whatever, fuck it" mentality that pervades these mid-term shenanigans. We have some interesting shit going on in Beerville (legal marijuana, fuck yeah!) and some really nasty house races. Oh yeah, and piss-lover Art Robinson, always good for a laugh.

It's all a bit anticlimactic here since we vote by mail. "Election day" is a bit meaningless, other than it being the last day you can get your ballot in and the day the counting finishes up. But with luck, hopefully today we'll all get to listen to this in celebration after it's all counted up: