War On Christmas: Battle Of The School Concert

It was a brisk, drizzle-filled night, as the troops marched toward the festively lit auditorium. The mood was generally light and upbeat, as the least religious place in the country did not expect the other side to put up much of a fight. Oh how we were wrong. So, so wrong.

It started innocently enough, with a packed house facing an undecorated stage filled with chairs for the band and a raised choir platform. A few of the troops glanced suspiciously at the decorated tree next to the sound board, but didn't think much of it. A generally optimistic platoon chatted lightly as some students took the stage.

Then, suddenly, we were under assault! Without even a chance to realize what was happening, the choir broke into "Oh Come All Ye Faithful." I watched veterans wince and writhe in agony, some barely able to hang onto their seats as the onslaught battered them. How was this happening? We knew no battle plan survives after the first shots are fired, but we were so unprepared for this. How could we be so naïve?

The strong among us fought back, glaring and grimacing menacingly at the stage until this first volley was past. Expecting our valiant troops to fire back with shouted boos and hisses, we hardened veterans were shocked to see our fellow soldiers applauding heartily! What is this treachery? Had we been infiltrated unknowingly by Christmas troops? It's like they knew our every move before we could react. This was going to be a bloodbath.

At this point the more experienced among us realized we must hold our ground as best we could and hope for a chance to retreat and regroup. This was a wholly unexpected attack from heretofore unknown quarters of the enemy, somehow secreted away in our former bastion of safety. Was everything we knew a lie? They had recruited our own kin against us! This must not, cannot, be allowed to succeed!

As the troops exchanged worried glances, the next assault began... But lo, what is this!? It's "Winter Wonderland"! Huzzah! All is not lost -- to arms! To arms!

Buoyed by this turn in the battle, we knew we still had a chance. Our children had not fully succumbed. The battle would go on... and on... and on...

After an hour and forty minutes of back-and-forth, the troops on both sides were bloody and bruised. Some had slumped in their seats, either dead or feigning so to avoid further agony. Overall the battle was almost even with many casualties on both sides, but we had the upper hand. Then the choir appeared alone, with hardbound books cradled gently in their outstretched hands. What is this? What fiendishness do they have planned now?

The grinning choir leader then announced... A LATIN MASS! But how... why... This just isn't possible. The dejected remaining troops were visibly taken aback, a stunned silence reigned, but we held firm. We couldn't let them beat us, not after making it this far.

Oh, were we not prepared for what followed. Endless indecipherable Latin, ebbing and flowing, rising to a hopeful crescendo of "Hallelujah, hallelujah" -- this certainly must be the end -- no, there are still more pages in that dastardly book of theirs. It went on... and on... and on...

And on... and on... until finally, after 20 long minutes of brutality, it was over. We sat stunned, shocked at this terrible savagery. Where could this have come from? Here, in our stronghold? It was inconceivable. How could they win here of all places? We were ruined.

And then, just as we prepared to gather the dead and retreat, defeated, the choir leader approached her microphone... What, is it not done? What horror can you further inflict on us, you MONSTER? We braced ourselves, we were surely all doomed... What is she preparing to say? Just get it over with!

"Have a nice night, happy holidays!"

Huzzah! The battle was long and many were lost. In the end, we managed the ultimate victory! Oh the joy, the relief!

This day will live forever as one of the greatest battles in this long war. May our valiant troops around the world take heart and never give up. Stay strong warriors, stay strong!

Tengrain over at Mock Paper Scissors posted the original video of Weepy McStagger, but I wanted to see what it looked like reversed:

Now I think it looks like he's saying "I think I did a pretty good job?" which is even more appropriate. And the look at the end is priceless. Alternate ideas of what he might be saying/thinking in this reverse universe are of course welcome. 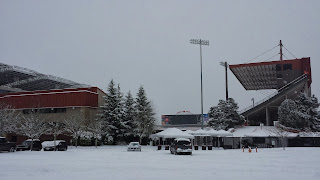 This urgent "Timely warning" from the Oregon State Police just showed up to my work email:

On Monday, December 2, 2013 Oregon State University received reports of three burglaries occurring in offices of University staff. The items stolen include a laptop computer, wallets, credit cards, cash, and identification. The credit cards were then used to make purchases at local merchants. Please take steps to protect your property. Do not leave your office unlocked, even for brief moments. Wallets, purses, book bags, and backpacks should not be left unattended.

If you see anyone matching this description on campus, do not approach or contact them. Call the Oregon State Police, University Patrol Office at 541-737-3010.

Please note that little bit of stuff I highlighted tt the end there. Yes, you read that right -- we're supposed to call the police if we see a tall 20-30 year old black dude, and/or an average 20-30 year old girl. ON A UNIVERSITY CAMPUS. It's certainly a good thing that people like that really stand out around here. The only way this could have been less specific is if we were supposed to look for a girl wearing leggings and Ugg™ boots.

This is an excellent use of police and campus resources, and will definitely lead to the suspect's imminent arrest. Yep, no doubt 'bout it.