I came up with a new name and logo for the current Washington's Racist Stereotype football team: 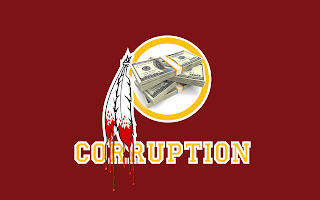 I think it fits.

Update: be sure to zoom for enhanced blood-drippy goodness.

Evidently all the things that were cool and hip and swingin' long ago in 2003 are back "in" again! Yay. Here, have an album released that year:

Here are a couple other things from that year. Nina Simone died:

So did Noel Redding:

So did Warren Zevon and Johnny Cash, and more.

And the Challenger Shuttle blew up on reentry.

And there was some war or something and a bunch of people in some country across the ocean might have died or been horribly maimed, but they don't count so whatevs.

Now I'm just gonna sit back and wait for the reanimated corpse of Robert Novak show up on my TV to out a CIA agent. Man, those were the days!

The NSA, GCHQ et al actually don't have the ability to conduct the mass surveillance that we now believe they do. Edward Snowden was in fact groomed, without his knowledge, to become a whistleblower, and the leaked documents were elaborately falsified by the NSA and GCHQ.

This latest contest revolved around surveillance (Schneier is working with Snowden and St. Glenneth of Greenwald. Thankfully, Schneier does actually know what he's talking about and lacks the oh so delightful tendency to lie unabashedly). This latest one's OK, but not quite as funny as the second one from way back in 2007, which focused on the TSA. A simpler time:

"Maybe," said Wilkes, not ready to write it off as just a screener's error. The NTSB guys were always quick to find a bad decision, one human error, and explain the whole thing away. But Wilkes' job was to find the flaws in the systems, the procedures, the way to come up with prophylactic precautions. Maybe there was nothing more than a screener who didn't spot a grenade or a stick of dynamite, something so obvious that there was nothing to do but chalk up a hundred and eighty three dead lives to one madman and one very bad TSA employee.

But maybe not. That's when Wilkes spotted the first two of the butterflies. Bright yellow against the charred black of the burned wreckage, they seemed like the most incongruous things -- and as he thought this, another appeared.

Anyway, just some Friday Filler I guess. hadn't read his blog in a while, and didn't know if any of my vast, vast readership had seen it. So check it out, or not, whatever.

To another useless Republican, Eric Cantor, for losing his primary fight against a Tea Party challenger. Your useless brand of craven indifference will be missed for all 30 seconds it takes for the next uselessly indifferent shitheel to take your spot.
at 6:21 PM 4 comments:

So, I guess this bullshit is just the sad cost of living in 'Merka (fuck yeah!) these days, huh?

This is fucking insane and needs to stop.

Update: Here's the live dispatch audio from the police responding to the shooting:

Tengrain and Bette Noir both posted different versions of what I was going to about the little town of Hailey, Idaho (I've actually been there), so I don't have to. Instead, I'll post another bit of sanity(!) from a state that is normally known more for its crazy:

A guy and his wife from Sandpoint, Idaho (I've been there too! Can't remember why...) have invented a solar smart road system and it's been getting great press and good funding from a crowdfunding drive. It looks like they're going to actually be able to go into production and do initial testing on sidewalks and parking lots.

Read the whole thing, etc., but in a nutshell it looks like they've actually thought of a lot of cool features, auto heating in winter to melt snow/ice, built in LEDs that can be configured in different ways (markers, arrows, warnings), channels underneath the road surface itself where fiber optics can run, and even a good way to provide charging stations for EVs.

Of course, since I'm a cynical bastard, this could all be a giant pie-in-the-sky boondoggle or scam, but I sure hope not.

Updated to add: I forgot one other bit of tech news I saw today, Pixar will release their next version of their Renderman software for free, noncommercial use. As part of my past life involved lots of 3D modeling and rendering and such, it's just super cool that people will be able to learn and play with one of the flagship tools in the industry without shelling out the dough. I'm sure it'll be good in the end for Pixar, but it'll also be good for everybody interested in this kind of thing. If the righteous Substance McGravitas were still around, I bet he'd figure out a way to make a disgustingly high-def animated 3D goatse or something. Y'know, important stuff we really need!

The Zombie, in a comment on the previous post mentioned a country singer coming to the Vancouver Folk Festival. While country isn't really one of my favorite things, I got to thinking about the "country" stuff I do like, and that had me looking through my music collection and stumbling on Eric Taylor (I may get a chance to see him soon). I'm not really sure if he's folk, or country, or singer/songwriter or maybe even more of a writer that happens to play what he writes. Anyway, I do like some stuff that might classify as some kind of "country" -- but absolutely nothing they play on the radio.

Here are a few songs, the first is a studio recording:

This second one is a live session from 2001 doing a Townes Van Zandt song -- the bearded guy is Steve Earle, the guy playing slide is another favorite of mine, Kelly Joe Phelps:

These next two are more recent, and have him doing a long but interesting intro to his "Hollywood Pocketknife" song that details how he wrote it. The "song" itself doesn't really start until about five minutes into the second video if you want to skip it:

And finally one last live song, recorded last fall and showing that he has a more upbeat side as well:

Someday I may actually get around to writing something rather than just posting a bunch of filler. Maybe.