is horrible and ugly and the beer is terrible. Stay away. 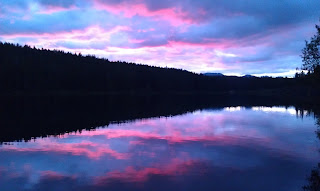 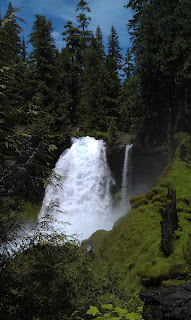 (Note, I have no idea who the tiny people are in the waterfall photo. They do help to show the scale though.)

Email ThisBlogThis!Share to TwitterShare to FacebookShare to Pinterest
Labels: my life is better than yours, Oregon

I see that M. Bouffant (and probably countless others) has beaten me to the punch, but I just don't care.

Oh well: today we celebrate that our lovely (for now) planet, tilted slightly on its axis, continues to rotate around the sun giving us Northern-hemispherians (suckit upsidedowners!) the delightful summer season, and the longest day of the year.

Alternately, you could think, "This sucks! It's hot! And now the days just get shorter again 'til December! Why doesn't Obama do something about the seasons? He's worse than Cheney McHitler!" But that would merely get you a well paying position at any of a wide variety of journamalistic organs, and we certainly wouldn't want that.

So anyway, yay, summer! Have some obscure versions of the classic "Summertime" -- I say "obscure" but I'm sure The Zombie has seen all these people live, even the ones that have been dead for 50 years. Regardless, I like how the song can be interpreted so many different ways and always be excellent.

(Side note: the band was originally "Friends Of Dean Martin" but then Dean Martin's estate sued them and they were forced to change it.)

Actually, this last one is not-obscure-at-all, Billie Holiday:

Email ThisBlogThis!Share to TwitterShare to FacebookShare to Pinterest
Labels: filler, friday, fucking seasons how do they work?, music you'll hate

Good Luck With That

There's a vast array of people coming out against the recently-rediscovered NSA spying stuff, and I am happy to see that. I commend all of these folks that are working against it, but I have to say that things like this:

"Now is the time for Congress to act," EFF attorney Mark Rumold said in a statement. "We don't need a narrow fix to one part of the PATRIOT Act; we need a full public accounting of how the United States is turning sophisticated spying technology on its own citizens, we need accountability from public officials, and we need an overhaul of the laws to ensure these abuses can never happen again."

Is just fucking laughable. Yes, we need that. Unfortunately, the American people don't care or are actively enthused that they're spied upon, because hey "I ain't got nuthin' to hide. If that there NSA thingy catches sum terrists, then it's fine by me!"

The chances of congress doing anything useful in regard to this is exactly zero. Oh, I imagine they'll do something, it just won't actually stop any of this. Remember, the last time folks noticed this was happening, the administration doing it was doing it in secret (like now), and also illegally without congressional or court oversight. What was congress' reaction then?

They made it legal. Retroactively.

Now, since a Dem is in power, it's going to be milked as a scandal by the usual suspects for a while, but the reality is that both sides want to continue to do this, and will. And again, the quaint idea that:

"we need accountability from public officials, and we need an overhaul of the laws to ensure these abuses can never happen again."

is even conceivable in today's America is just a sad, sad joke.

We live in a world where people will happily give over private details of their lives to mega-corporations like Facebook and Google (look where you're reading this!) for free. If offered a chocolate bar, people will give up even more private information, including passwords. No, really. People just don't care that they don't have any privacy anymore, and in the cases where they do care, it's mostly about things they would rather their parents/spouses/friends/social circles/etc didn't know about.

Civil libertarians and folks like the EFF quoted above are rightly worried about our continued slide into a constant surveillance state and I wish them the best. Unfortunately it will be a huge uphill battle to get anything done in the face of a completely apathetic public and a solidly entrenched culture of surveillance and secrecy in all parts of our government.

Woo, Friday. Have some blues:

A great modern version (2004) with R.L. in attendance just before his death:

After yesterday's post about GMO wheat, Another article out today with a bit more detail. The telling bit from there is this:

Heavy criticism has already hit Monsanto, including a lawsuit filed Monday by a U.S. farmer who is alleging the seed company was negligent in allowing its experimental seed to escape its control.

Monsanto countered that its wheat development program was "government-directed, rigorous and well-documented and audited."

The field trials were conducted under a streamlined system known as "notification," which is more lenient than the tightly controlled permitting process.

Under the permit process, companies must establish buffer areas around field trial sites to help avoid contamination of neighboring fields; to use only dedicated machinery and storage facilities for GMO material; and train personnel. Annual inspections are required.

Under the notification process, there are fewer field inspections and regulators rely largely on developers like Monsanto for evaluating and reporting the adequacy of their controls.

Over time, more and more field trials have come under the notification process and it now accounts for the vast majority of field trials on biotech crops.

In light of the discovery in Oregon, USDA should assess its review process, said U.S. Sen. Jeff Merkley of Oregon.

"This incident underscores the need for an agency review of field-testing practices to determine how to avoid this situation in the future," he said.

Again, who could've possibly predicted that allowing massive corporations to police themselves would result in anything but glorious positive outcomes and rainbow sparkleponies for all? Inconceivable.

Also, thankfully we have an actual progressive Democratic Senator now in Merkley that isn't in the corporate pocket like his predecessor Smith was, and isn't a traditional, wishy-washy, centrist, Paul Ryan-lovin' "normal" Democrat.

Care to guess which state could possibly ruin all international sales of U.S.-grown wheat? Yep, it's us!

Well, I mean technically, if you want to be pedantic, Monsanto had a little bit to do with it also. But who could've ever predicted that trials of a genetically modified crop could possibly escape into the wild? I mean, that's clearly inconceivable.