I've seen a bunch of stuff all over the Intartronictubes about gun control this week. Mostly it's all: "guns are bad, get rid of them" and "bbbbut my farm, and hunting, and defending my castle from invaders!" -- I get it, honest. Up until this week, when this shit got way too personal for me (and I'm not going to detail that further than to just say teachers in this country aren't paid nearly enough to deal with the kind of shit they deal with), I really liked having my own personal arsenal around the house. But why did I like that? I never really thought about it.

I haven't shot any of my guns for a couple years now, but they're there, in the safe, ready. But for what? I don't hunt, so not that. Zombpocalpyse? Hmm, maybe I'll keep a shotgun. A home invasion? Yeah.... no.

I have not and cannot live in that kind of fear -- I've never had a loaded weapon by my bedside, and never will. How is a gun locked in the safe gonna help me in that invasion, exactly? Oh right, it won't.

"But I have a farm! I have to defend my chickens!"

Yep, I get it. I lived on a farm for a number of years, but the farm raised grass (not the fun kind) and xmas trees so predators weren't a big deal. Mostly we had to worry about gophers, rabbits, and coyotes, just as annoyances. We ignored the rabbits. The coyotes came around at night to try to eat the rabbits -- no biggy, ignore them too. I think a coyote got a cat once, but I don't really like cats so there's that. The gophers were a bit of a messy pain, and hard to shoot. I tried (and failed) shooting them but that is hard and wastes way too much time. Oh well, there were some holes in the yard. But yeah, I can see that. A nice small-bore bolt-action rifle and/or a shotgun should do just dandy if you really need them, so you should keep one of those. I'm cool with that.

I understand the rural hunting and guns-on-the-farm thing, really. I'm not a hunter, but I know many hunters and have lots of hunting weapons I inherited. I understand the appeal -- I've had fresh venison. Hunting or having a gun around to protect your farm does make sense to me.

But that doesn't mean we need the kind of ridiculous fucking gun culture we have in America.

Obviously, I don't think a full ban would ever fly in 'Merka. Just way, way too entrenched and way too much money spent convincing people they "need" guns. But I still think we have an oh-so-brief opportunity to do something.

That opportunity will, of course, be utterly squandered by our useless political class. Before it is, it would be at best constructive, and at worst slightly amusing, to imagine something that might work in the way of gun regulation. So I will. And please note again, I own many guns:

First, ban all semi-automatic weapons. Yes, all of them. (Note, this would require that I get rid of several of my own guns. I'm cool with that.) They serve no legitimate hunting purpose. If you need a semi-auto to hunt: UR DOIN IT RONG. Banning them all means no more quibbling over what an "assault rifle" is, which is critical.

B) ban all high-capacity weapons. Again, if you need more than a few shots for hunting: UR DOIN IT RONG. And yes, that means I need to get rid of more of my own personal guns (although high-capacity and semi-auto tend to go hand-in-hand, no surprise). Oh well.

3) no handguns. Yeah, people love them, but they serve no purpose. And no, once again, "self defense" is not a real purpose, and if you really think having a gun around the house will save you from the blahs coming to steal your white wimmens, go buy a nice simple double-barrel shotgun. Bonus: you can force the dude that gets your daughter pregnant to marry her while standing there like the patriarchic asshole you probably are.

IV) regulate, regulate, regulate -- like the sacred second amendment says! Guns are way, way, WAY too easy to get in this country. There are dozens of mundane things we all do day-to-day that take more work than owning a gun. Getting a gun needs to be at least as hard to deal with as it is to try to start a fucking legal brewery!

Fünf: Have all the fancy shit we just banned be available to play with at licensed, ridiculously regulated, private facilities. Shoot the hell out of those guns! Waste thousands of dollars on ammo! It's almost as good as Viagra after all.

Will we see an instantaneous drop in gun violence in this country and suddenly only worry about violent attacks from sparkleponies? No. Would it make a difference? Probably. I'm willing to try it to find out.

And yeah, I've completely glossed over the "how" parts in all of this "banning" talk. Gov't sponsored gun buy backs? Buy backs by private anti-violence charities? Ship them all to Somalia, along with the owners that refuse to get rid of them? Dunno. I'm sick and tired of thinking of violence and death, and thinking about how our useless goverment could manage to implement all the details behind this pipe dream is just too much right now.

I recognize that this is all a sad fucking dream. Oh well, a guy's gotta dream. 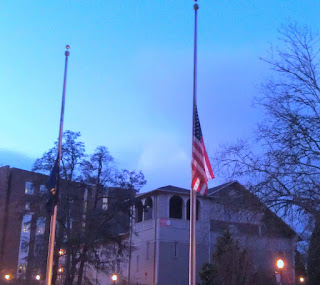 I wish I was hopeful that this was the last time I'd see these flags like this. 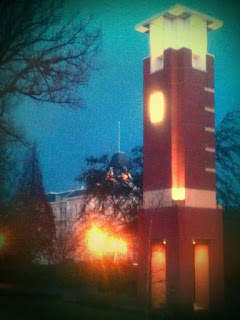 Couldn't be any reason for me to take special notice of this clock tower today.  Nope. 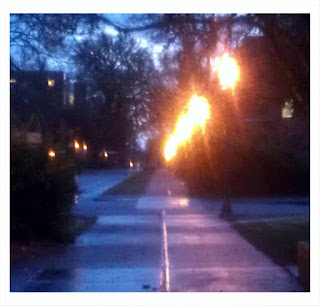 This second pic just shows the serenity of a deserted campus.  Thankfully campus is deserted because everybody's on break, not because there's some madman shooting the place up. 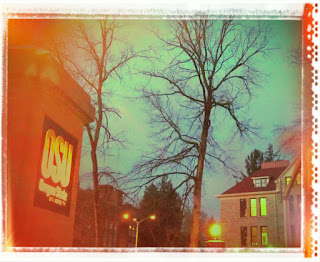 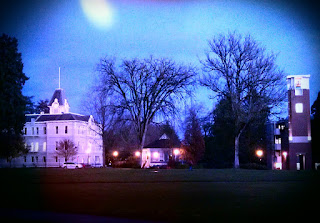 Pics taken on my walk to the bus stop tonight. No Instagrams were harmed --or used-- in the creation of this blahg post.

Not sure whether I prefer this version that doesn't really indicate the scale: 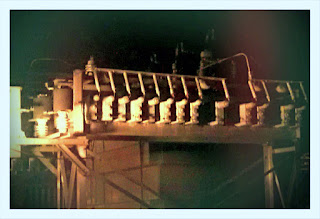 Or this version that adds the bleakness of the barbed wire/chain link: 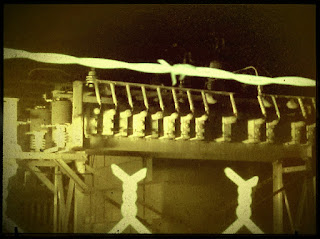 Ryan North of Dinosaur Comics has some startling revelations about Frosty The Snowman: 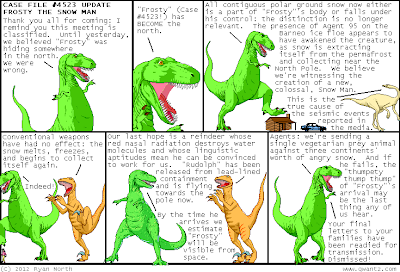 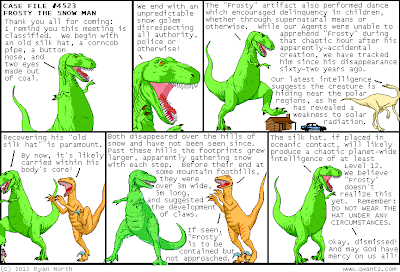 Rudolph vs. Frosty needs to be a thing.

With the holiday season in full swing and the weather exceptionally shitty, my typical seasonal sadness starts to kick in. The ebb and flow of friends/acquaintances moving through a college town can effect that too.  This song is the perfect complement to that feeling, but wasn't on the ute-oob. Since blooger doesn't seem to want to let me upload just audio, I put together a quick video with some sunset photos I took in summer.  Sorry about the "Ken Burns" effect -- I know it's the standard cop-out of quick videos.  You'll live.